Warning: "continue" targeting switch is equivalent to "break". Did you mean to use "continue 2"? in /nfs/c12/h06/mnt/217567/domains/slapdashfestival.com/html/wordpress/wp-content/plugins/types/vendor/toolset/types/embedded/includes/wpml.php on line 660
 Shows & Headliners – #Slapdash
Skip to content 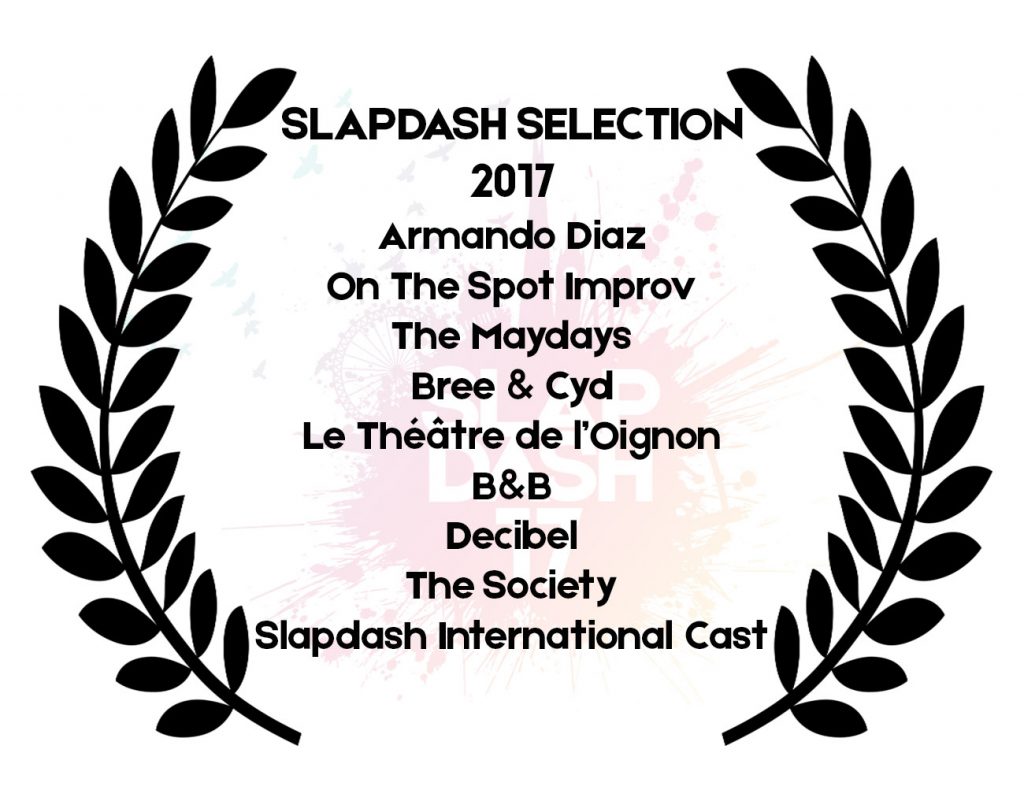 We are very excited to announce this year’s Slapdash International Improv Festival line-up! Book tickets for individual nights or bag yourself a Season Ticket and make sure you don’t miss a single show! We have Armando Diaz (creator of improv format The Armando!), Hawaiian group On The Spot making their international debut, our first ever Slapdash International Cast and SO MUCH MORE! Check out the programme below…

The Maydays The Maydays are an award-winning improv company based in Brighton and London, specialising in musical long form and celebrating their 12th birthday this year. They have played hundreds of shows all over the UK and internationally, and have headlined Improv Fest Ireland, Barcelona Improv Festival and the Finland International Improv Festival.

On the Spot present ‘Hush’: the Improvised Silent Movie – On the Spot from Honolulu Hawaii, have been entertaining audiences all across the country with their unique brand of improvised theater. Their signature style incorporates narrative storytelling, minimal dialog, and strong blocking to create cinematic images to tell complex stories.Set in the style of the biggest silent movie stars of the day such as Charlie Chaplin, Harold Lloyd and Buster Keaton, “On The Spot: Hush” captures all the drama and nostalgia of the silent movie era, with strong characters, physical comedy and live musical accompaniment.

B&B -Betse Green and Bill Cernansky have been married since 1989. They’ll take a break from exploring their own relationship to explore some made-up relationships for you, probably stealing each other’s characters, too, because it’s much easier to do on stage than in real life. Playing as a duo, B&B focus on what they know best: relationships. Their signature format is the Revolver, in which the players are free to steal each other’s characters after they have been established. It’s all fun and games until someone loses an eye*. It’s still all fun and games after that.

Random is an improv show in its purest form. Random is a messy playground for grown-up children and an open window on their imaginative power. From no suggestion, actors and musicians take you to different universes, discovered in front of you, from spontaneously created sets. Headliner at the Big If, Random has toured to Brussels, Leuven, Barcelona, Tampere, Dublin and Amsterdam and is taught and performed by other troupes around the world.

Slapdash International Ensemble For the first time ever, we present the Slapdash International Cast. These performers auditioned and were selected to train for the first time together the week of the festival and headline Friday night.   These performers are experience improvisers, actors and musicians from six countries (UK, US, Canada, Italy, Germany and Peru) will be presenting an improvised one acted played director by Austin based director, Jon Bolden of The Hideout Theatre. Jon is an award winning director, actor and improviser specialising in ensemble narrative storytelling and is known for his award-winning Nothing & Everything: Improvised Anton Chekhov Plays and the Manhattan Stories: Improvised “Woody Allen Films.” He has also been the producer of the Out of Bounds Comedy Festival in Austin. We are excited to see what this team presents for the first and last time.

Decibel – In everyday life, how do we do when we want to express ourselves and Is impossible to speak? Decibel, using the art of mime and bodily fluency, offers spectators the opportunity to immerse themselves in situations, real ones or not, where language is not possible. Accompanied by a musician-percussionist who participates interactively in the creation of the stories, they will bring you to realistic and surprising universes.

The Society for the Improvement of Mankind in all its flaws and Wonders – The Society is part-show and part self-help group. Don’t worry, you are already a member. The Society is composed of all of those who believe in the great and unrealised potential of mankind, including Nursery improvisers and even members of the audience. The Society improvise what is, was and should be. Mankind needs us all.

Armando Diaz and Friends perform the Armando Diaz Hootenanny and Theatrical Experience – ‘The Armando’ began as an improv form in Chicago and is now performed throughout the world. It begins with a true monologues, a story from the player’s own life. After the monologue, players improvise scenes inspired by it. Ever wondered what the original Armando was like? Well, here is your chance. Armando Diaz is headlining Saturday night and will be joined on stage with cast of improvisers from all over the world. Armando is widely regarded as one of the best improv teachers in New York City and beyond. His list of teaching credits is a long one: the ImprovOlympic Theater, Victory Gardens Theater, The Upright Citizens Brigade Theater, NYU and Michael Howard Studios. He has trained dozens of actors who have performed or written for Saturday Night Live, Late Night with Conan O’Brien, Mad TV, and The Daily Show.