Warning: "continue" targeting switch is equivalent to "break". Did you mean to use "continue 2"? in /nfs/c12/h06/mnt/217567/domains/slapdashfestival.com/html/wordpress/wp-content/plugins/types/vendor/toolset/types/embedded/includes/wpml.php on line 660
 Headliners 2014 – #Slapdash
Skip to content

Slapdash 2014 is looking like the biggest year yet. We are proud to announce our brilliant headliners for Slapdash 2014. They are:

Dave is from Canada and produces, performs and teaches improv all around Victoria, where he is the artistic director of Paper Street Theatre co. He has worked with The Canadian Improv Games for over 10 years and is currently the Regional Director of the Vancouver Island Region. Dave is the curator of the Way of Improvisation and gave this talk about improvisation for TED.
As a slam poet, Dave has competed in Vancouver and Victoria and was a member of the 2009 and 2010 Victoria Slam teams. He performs as one half of the improvised spoken word duo SpeakEasy with his partner Missie Peters. He has been teaching workshops for over a decade. His one-man improvised storytelling show won Pick of the Fringe for best Comedy in 2011 and his show “Photo Booth” was selected to be part of the 2012 UNO festival.

Will Luera and ‘Blue Screen’

Will is the Artistic Director Emeritus of ImprovBoston, Artistic Director of the Lowell Comedy Festival, former Mainstage Director at ImprovAsylum, and Artistic Associate of the Chicago Improv Festival. Will joined ImprovBoston in 1997 as a member of the Mainstage cast before joining the TheatreSports cast and helping to start the Boston franchise of Sitcom. In 1999, he left ImprovBoston to start his own improvisational theater company called Blue Screen. In 2000, he rejoined ImprovBoston as Artistic Director, directing the Mainstage cast. He has appeared in numerous improv festivals around the world.
In addition to his work at ImprovBoston, Will has taught improvisation classes for the Young Presidents Organization (YPO), the National Fire Prevention Association, Northeastern University, Boston College and has directed shows for the ImprovAsylum, The Tribe Theater, Another Country Productions, and The Alarm Clock Theater. He has also directed short films for the 48-hour film festival and Filmerica. In 2004, Will was the Boston and national winner of PAX-TVs World Cup Comedy. 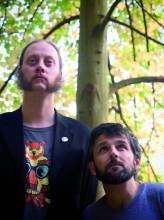 White and Dellefont are from different countries yet are cut from the same cloth. White is from the improv troupe CRUMBS (Winnipeg, MB), and Dellefont is from the troupe Dad’s Garage Theatre in Atlanta, Georgia. Over the course of their three decades of improvisation, their paths have long crossed at festivals, on tours, and in each of their home towns and now they are touring together for the first time.
René has been improvising at Dad’s Garage Theatre in Atlanta since 2003 and is currently their Associate Artistic Director. He has been performing and teaching improv for more than 15 years and is also well-known as an actor and DJ. He has toured in Europe and to numerous festivals in North America.
Part of the acclaimed improv duo CRUMBS from Winnipeg, Canada, Lee White has been performing and teaching improvisation nearly all his life. Touring shows and workshops all over Europe, New Zealand and North America, he has performed with improvisers all over the world. Aside from the legendary CRUMBS shows, Lee has also been involved in the creation of several new formats including The Big Smart Improv Show and the Dungeons and Dragons Improv Show, both Fringe hits.